The online presence of The Niagara Anglican monthly print newspaper. We serve the Diocese of Niagara and its many parishes. An archive of the monthly print edition can be found here.

Unbelievable; Why Neither Ancient Creeds Nor the Reformation Can Produce a Living Faith Today
John Shelby Spong (HarperCollins, 2018)

I returned at the end of February from the Wycliffe tour of Israel to find Bishop John Spong’s latest book in the mail. 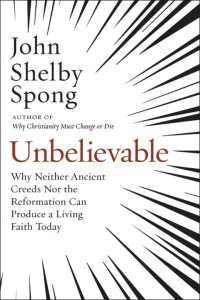 Spong, two years ago, suffered a stroke which curtailed his weekly essay writing and his many speaking engagements, but he has finished what he says is his last book. I rather doubt it: just as this book is based on a series of his weekly essays from the last two years, so his publishers and literary executors will no doubt produce posthumous collections of his essays and his speeches. We will hear more from this modern day prophet for many years to come.

And prophet is what Spong is, for, in the Biblical tradition, he calls people to renew their connection to God. What he challenges are traditional explanations as he calls for new language to describe our 21st century understanding of the Divine, because, as his title suggests, traditional expressions of the Christian faith have become “unbelievable” to modern day minds. His book explores, as his subtitle says, “why neither ancient Creeds nor the Reformation can produce a living faith today.”

Spong posits 12 theses to encourage a new reformation, a new re-formation of our spiritual lives. He begins with the theistic image of God, replacing the vision of God as a Supreme Being with God as Being itself. That first thesis challenges many fundamentals of creedal faith. Without a judgmental god to appease, there is no need of “God’s great rescue plan” for mankind, no need to limit our understanding of Jesus’ crucifixion as a sacrifice for the sins of all: “There can be no ‘substitutionary atonement’ in the Christianity of tomorrow.”

Excellent Biblical scholar that Spong is, he examines what the scriptures actually say about the crucifixion and the resurrection. Freed from reading the Gospel accounts literally, Spong discovers the spiritual enlightenment behind the New Testament writers’ Easter experiences.

Finally, Spong examines the outcomes for a living faith in the areas of ethics and prayer. The yardsticks for both are that which enhance “living, loving and being”.

Unbelievable is believably clear and concise. It reads easily but provocatively, calling for Christianity, or at least its contemporary expression, to change or die.

Spong’s last book summarizes the clarion call of his career for a new Christianity for a new world.