The Universal Christ, by Richard Rohr 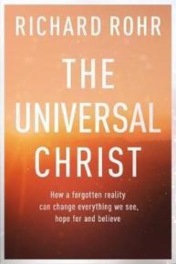 Whether we agree with his teachings or not, Fr. Richard Rohr — Franciscan priest, ecumenical teacher and author — is one of the world’s most influential spiritual thinkers.

The first chapter of The Universal Christ is entitled Christ Is Not Jesus’ Last Name. He writes, “The whole of creation — not just Jesus — is the beloved community, the partner in the divine dance. Everything is the ‘child of God.’ No exceptions. When you think of it what else could anything be? All creatures must carry the DNA of their creator.”

Richard believes that Jesus came to show us how to be human much more than how to be spiritual, and that the process still seems to be in its early stages.

We often start with the human incarnation of God: Jesus.

We need to actually go back much further than that.

As Richard mentions the first incarnation happened some 13.7 billion years ago, “when God joined in unity with the physical universe and became the light inside of everything”.

Jesus came out of this already Christ-soaked world. Jesus is actually the second incarnation, Richard tells us. We definitely need to shift our perspective on who this God is.

Drawing on scripture, history and spiritual practice, Richard articulates a life-changing view of Jesus Christ as a portrait of God’s constant, unfolding work in the world.

“God loves things by becoming them,” he writes, and Jesus’ life was meant to declare that humanity has never been separate from God — except by its own negative choice.

When we recover this fundamental truth, faith becomes less about proving Jesus was God, and more about learning to recognize the Creator’s presence all around us, and in everyone we meet.

Now in his 70s, Richard has taken his many years of wisdom to reclaim the name of “Christ” to mean much more than Jesus’ last name. If we take anything from this book, it’s that Christ is in all, and in everything. And that is good news.

The Reverend Rob Roi is a parish deacon at St. James’ Dundas.