By Diocesan Communications on March 24, 2018

On a mild, sunny afternoon, the 144th Synod of the Diocese of Niagara made history by electing its first female bishop.

The Reverend Canon Susan Bell, serving in the Diocese of Toronto, was elected to become the 12th bishop of Niagara.

It was the culmination of a day which was filled with the presence of the Holy Spirit.

Chair of the special electoral Synod, Archbishop Colin Johnson, in his homily during the opening Eucharist, reminded delegates that this was not a leadership convention. (“That’s happening somewhere else,” he quipped, referring to the PC party leadership race.) He continued, “Instead, we are here to discern on behalf of the church of God.”

He encouraged everyone to decide which candidate they felt has the gifts to meet the specific needs of the church today. He ended his homily with the instruction, “Listen to the leading of the Spirit.” Frequently during the day Colin also reminded those present to pray for discernment as they voted.

With over 90% of all registered delegates present, the election would be decided with a simple majority in both orders. To win the election, there had to be a majority vote for the same candidate by both clergy and laity.

Instead of paper ballots, electronic “clickers” were used for the voting process. That meant that all votes could be cast within 60 seconds and results were tabulated instantly.

However, the results were first shared privately with the candidates in another room.

They were then given a time to pray, consider and decide if they wished to continue or withdraw their name. After returning to the main hall, the ballot results were announced to all, immediately followed by the announcement of any candidate withdrawals.

No candidate withdrew after the first ballot. After the second, David Anderson, Stuart Pike and Martha Tatarnic had withdrawn. At the end of the third ballot, David Burrows and Robert Hurkmans withdrew, leaving only Susan Bell and Rob Fead on the fourth ballot. That vote resulted in a stalemate with Susan Bell winning by one vote among the clergy, while Rob Fead won among the laity by two, resulting in a fifth vote.

When the results of the fifth and final ballot were announced, there was immediate cheering and applause. A standing ovation greeted a visibly emotional Susan as she was escorted into the cathedral by Bishop Michael.

After the cheering died down, Archbishop Colin formally asked Susan if she accepted the position to which she had just been elected, which she did. With all of the candidates brought onto the stage, Archbishop Colin thanked them for running, remarking how difficult it is for anyone in that position.

Runner up Rob Fead moved that the election be declared unanimous, which was greeted with more applause.

Bishop-elect Susan thanked the other candidates, including a vote of gratitude to their spouses for their support in the months leading up to the election, which she said she knew was an emotional roller coaster for every one of them. She then turned to thank her husband Tom—who was at her side—and finally the members of Synod for their show of faith in her ability to lead the diocese.

After the election concluded, all of the bishops in the Ecclesiastical Province of Ontario gave their assent, which is a requirement.

The consecration of Susan Bell as Coadjutor Bishop — assistant to the diocesan bishop with rights of succession when he resigns — will be held on May 5. She will then succeed Bishop Michael as Diocesan Bishop June 1.

Craig Fairley is Art Director of the Niagara Anglican.

Here is a summary of the results for each ballot. A majority of votes in each order — Clergy and Lay — was required for election. 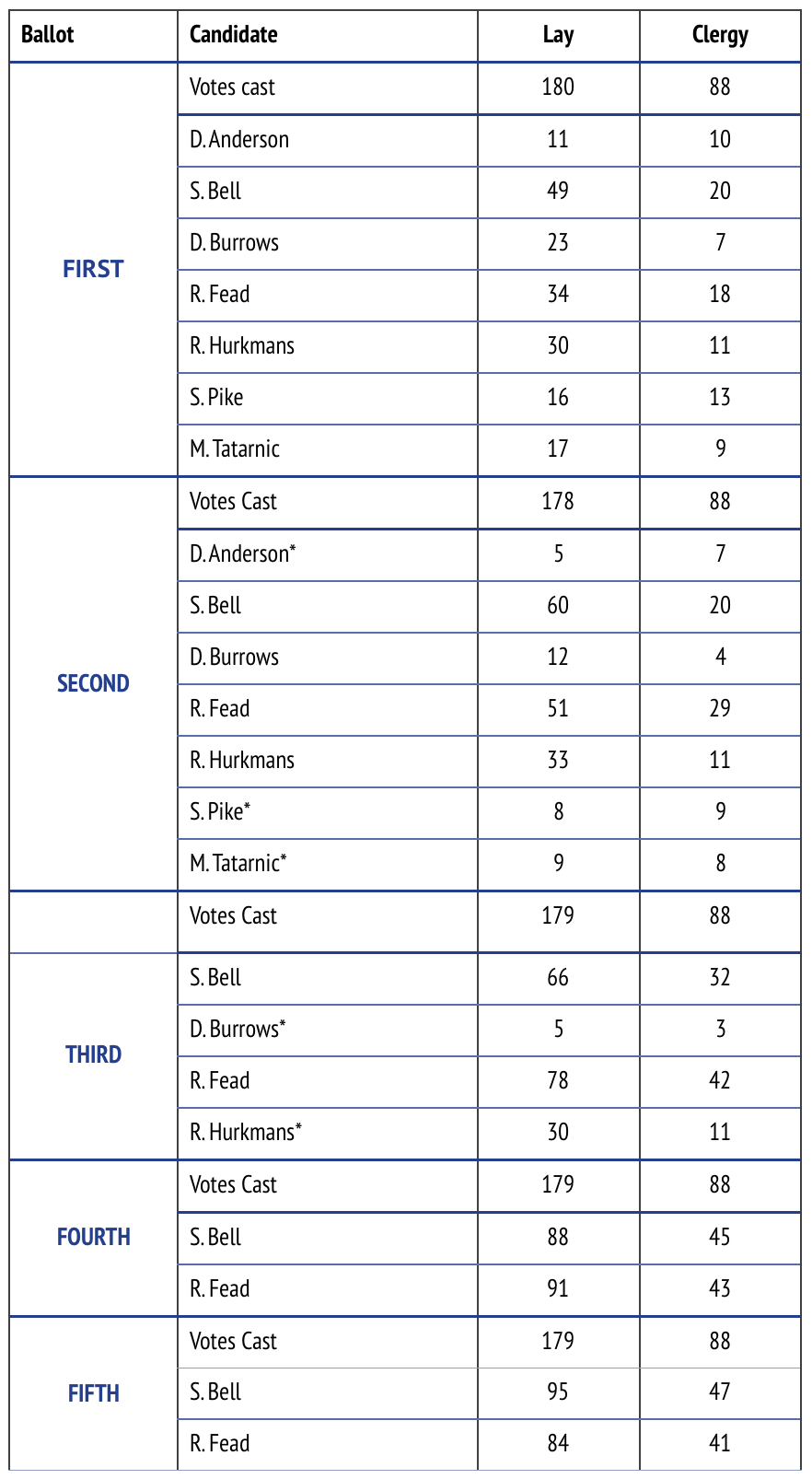 * Indicates candidate withdrew after the results of this ballot were announced.