By Diocesan Communications on March 2, 2020

On a dark Saturday night in August 2019, Zenaida, one of our local farmworkers from Mexico, was involved in a fatal hit-and-run accident in Niagara-on-the-Lake. This young mother had been working in Niagara-on-the-Lake for the past two growing seasons on a local fruit farm, in order to support her daughters, as well as her elderly parents in Mexico.

This tragic event was felt deeply by many people – the Canadian and migrant workers community – in the Niagara Peninsula, her employer and family, her co-workers, and especially her two daughters aged eleven and seven who were left without their young mother and provider.

Several days later a vigil was organized by a local migrant workers group where Canadians and migrant workers attended, including Mayor Betty Disero who stated, “This tragic fatal accident has affected so many lives.” The Mayor expressed her condolences to Zenaida’s family and the migrant workers in Niagara-on-the-Lake. In Zenaida’s honour, the Canada flag at Town Hall was flown at half-staff on August 26, 2019. Mayor Disero also asked for donations to be made to a gofundme account. The generosity of Canadians and migrant farmworkers raised $37,533.00.

As the local and provincial news media covered this unfortunate and sad story a couple, Sacha and Jan, from St. Andrew’s (Grimsby) were deeply moved. They contacted their Rector, Archdeacon Max Woolaver, about how they could help the migrant farmworkers who so diligently work in our greenhouses, vineyards, nurseries, and fruit farms.

Sacha said, “For a long time, I’ve wanted to do something about the lack of safety for farm workers travelling on the roads, but I haven’t really known how to go about it.”

Archdacon Woolaver facilitated Sacha’s connection with the Migrant Farmworkers Missioner. During the conversation around the best way to proceed – if to get vests or equip bikes with reflectors – Sacha found a lightweight bright reflective adjustable vest strap for walking and cycling. She indicated, “The reviews say the advantages of the straps over the vests is that it isn’t hot to wear in the summer and in the cool weather, it fits easily over bulky jackets. As well, it would be easy for people to just fold up & keep in a pocket, so they would always have it with them when they need it.” 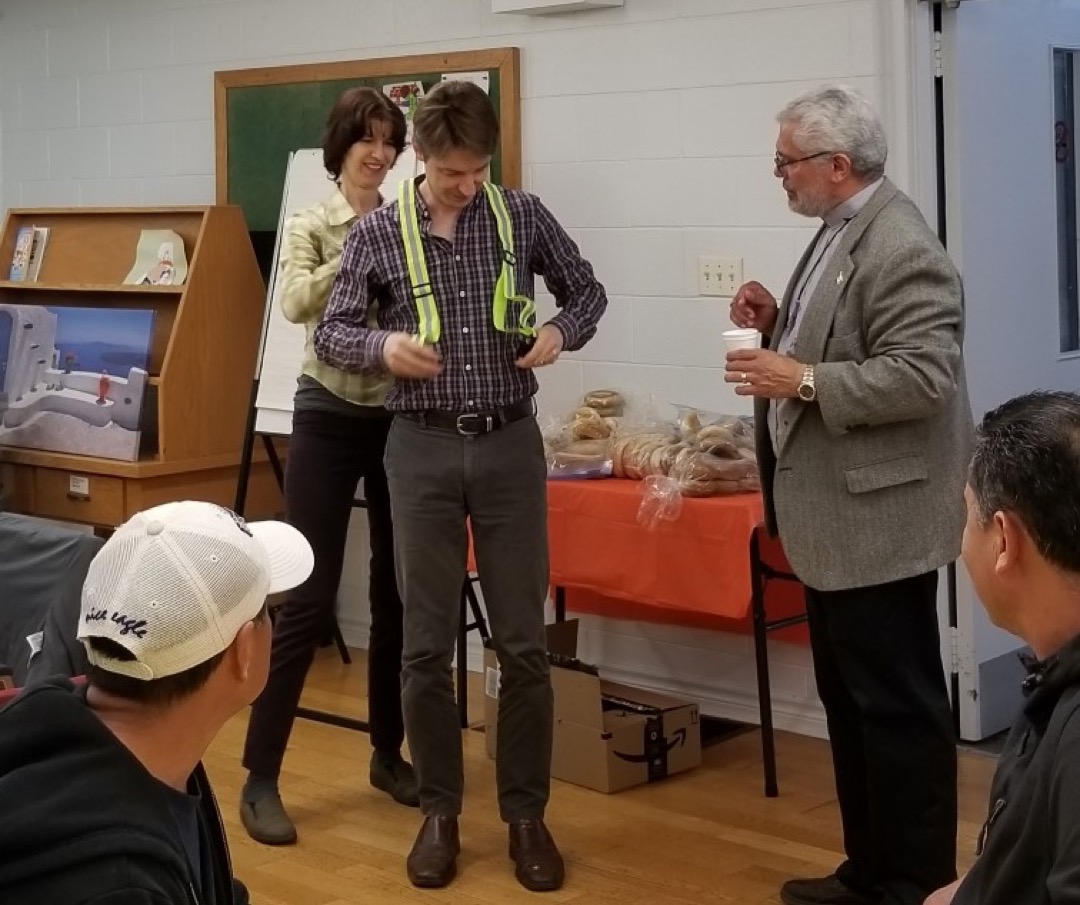 On September 29, 2019, Sacha and Jan gifted the migrant farmworkers with the donation of the reflective vest straps. This took place during the final Eucharist and Community Meal of the 2019 season at St. John’s (Jordan). Not only did the migrant workers receive the reflective vest straps, Sacha and Jan provided instructions and a demonstration on the proper way of wearing it. One could easily see the smiles and excitement of the migrant workers.

In December, as a way of showing gratitude to Sacha and Jan the Hendriks Greenhouses migrant workers invited them to the closing home Eucharist and special Mexican “mole” dinner prepared by Adelfo and others. Mole is known as “manjar de los dioses” or “delicacy of the gods” a traditional pre-Hispanic exotic combination of different hot peppers and dark chocolate. Everyone enjoyed the meal and sharing of stories. During the course of the evening Jan connected with a migrant worker and taught him English as the migrant worker taught Spanish greeting phrases to Jan.

“Improving the safety of migrant farm workers in Niagara on the roads after dark is long overdue and it’s terrible that a young woman has lost her life in this way (and her young daughters have lost a mother). Hopefully, if some workers begin wearing the vests, then the practice might catch on and become the norm on the roads at night,” Sacha said.

Despite a tragic accident, good will and friendship connections have been made between Canadians and the migrant farmworkers.

The Reverend Antonio Ilias is the Diocesan Missioner to Migrant Farm Workers. 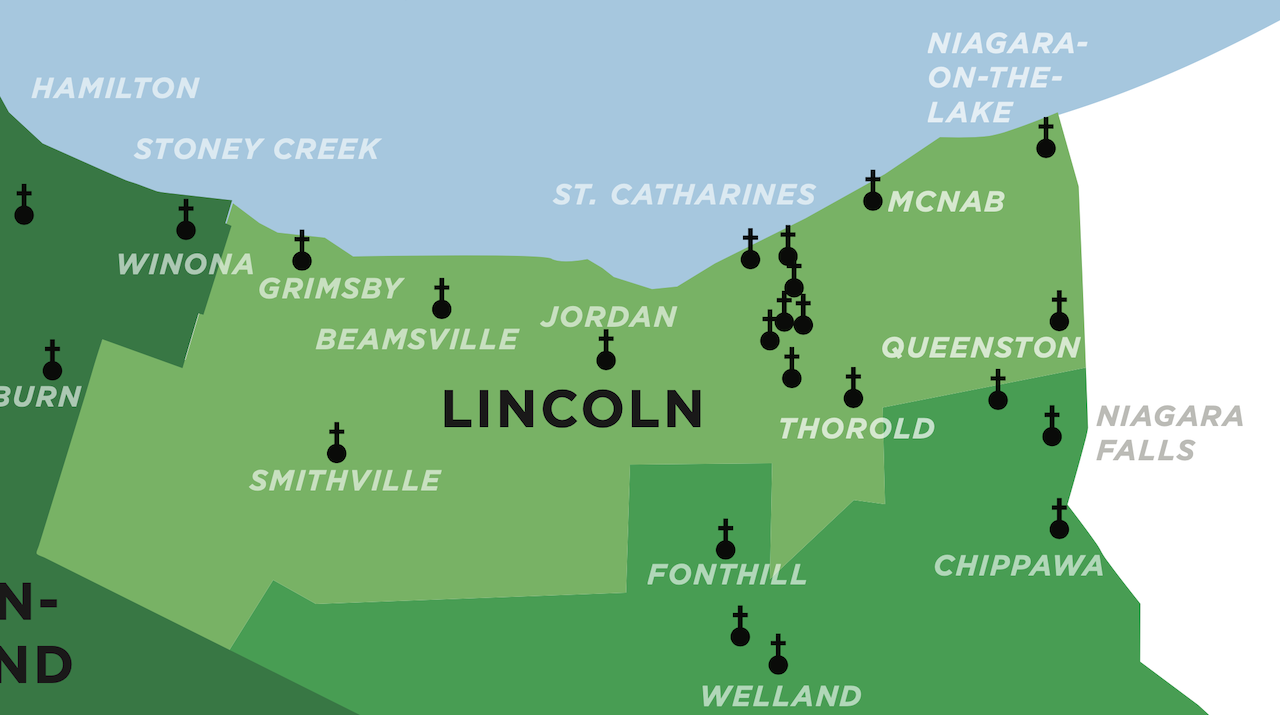 Lincoln Region is surrounded by a blessed mixture of history and agriculture.

It is steeped in history (the War of 1812, Canadian heroine Laura Secord, General Isaac Brock), culture (home of the Shaw Festival), the OHL Niagara Ice Dogs, and the Lake Ontario entrance to the Welland Canal.

This is also the province’s “wine region” with close to 100 wineries, and even more fruit producing farms, and is home to the popular The Forty Creek Distillery (Grimsby), and the Bench Brewing Company (Beamsville). It is also home to a countless number of greenhouses, which ship flowers around the world.

In the midst of all this culture and growth and activity, The Anglican Church seeks to let the light of Jesus shine. From traditional services to contemporary liturgies … historic churches (St. Mark’s Niagara on the Lake, St. Saviour’s Queenston) to less traditional gatherings (Ridley College chaplaincy and the Mission to Migrant Farmworkers), we offer it all …. And continue to seek new ways to meet the needs of our community, and proclaim the gospel.