A Climate Change Book That Is Not Based On Fear

Saving Us: A Climate Scientist’s Case for Hope and Healing in a Divided World by Katharine Hayhoe (Atria/One Signal Publishers, 2021)

As I write this at the end of 2021, future lockdowns are more likely—which means you may have extra time to read in 2022. This book by Dr. Hayhoe is one you should put on your reading list. Born in the Toronto area, Dr. Hayhoe now resides in the US where she teaches at Texas Tech University.

The author writes very clearly about the dangers of climate change inaction, but also includes positive actions we can take. She seamlessly balances her career as a climate scientist with her Christian beliefs. 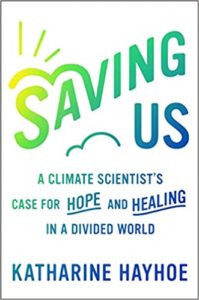 Dr. Hayhoe has become well-known for her TED talk, “The Most Important Thing You Can Do to Fight Climate Change is to Talk About It.” One listener asked why she didn’t write a book, and so Saving Us was published in 2021. Her scientific words for climate change are “Global Weirding” and says categorically that humans have caused this because of carbon emissions. Her Christian voice reminds us that in the Bible people have a responsibility over the earth and the animals.

As we have discovered during the pandemic, people don’t want governments telling them what to do. Solutions are onerous. People want to feel good about themselves, so blaming them for climate disasters is not the way to go. Guilt can motivate, but like fear it can also shut us down. Dr. Hayhoe also doesn’t believe that shaming people helps—often it makes them do the opposite.

In your own life, start to make changes; Dr. Hayhoe tries to introduce two new low carbon habits to her life annually. She believes that the more we do something, the more it matters to us and the more we care. She believes that individual things matter, but so do group activities such as joining the kids’ Friday climate strikes. But the best way is to talk about it to everyone you meet at the level of connection you have with them. As Christians, we need to show we care.

She believes people need solutions, and her overriding message is to mention climate change to people where ever you have overlapping interests. This might be with other parents at the school doors who are concerned about the future their children might inherit. Or it could be fellow gardeners watching strange weather patterns, or people on the ski hill seeing less snow. Dr. Hayhoe says to find the connection and open the door to talk about the changing planet.

Ask people on a scale of 1-10 how concerned they are about climate change. Then listen to their responses—don’t attack, be respectful, show empathy to their views. Keep your answers short; she quotes Ronald Reagan: “If you’re explaining, you’re losing.”

If you have more spare time this year, reading Bill Gates’ book, How to Avoid a Climate Disaster, is also worthwhile. While Dr. Hayhoe focuses on what humans can and should be doing, Bill Gates feels that technology is the answer. Both say we need to act now. So, choose something that is making a difference to our world—be an early adopter and get others to follow you by talking to them.

Sue Carson is a parishioner at St. James, Dundas, and chair of Climate Justice Niagara