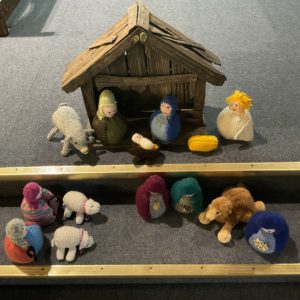 At a recent clergy conference, we were asked to think about times when we had experienced Joy in our various ministries. I remembered several times when I had delighted in watching children at play.

Teaching Sunday school, I often borrowed the ‘Godly Play’ concept, but I usually followed the Lectionary and selected the props to suit the story.  Some were obtained from dollar stores, but others came from my imagination. For the Ten Commandments, I created a tabernacle from a tiny, hinged, decorated wooden box, to which I attached dowels for carrying handles. Painted with metallic gold paint, it held two small grey tablets cut from a tongue depressor, on which the commandments were written. Using instructions from a “knit your own Bible” website, I created the characters for the story. Those simple people made a lot of guest appearances in other stories, as did the dollar store animals.

When Canon Lynne Thackeray saw what I was doing, she challenged me to knit the Last Supper from a pattern she had obtained. A friend of hers had knit the tableau, which was kept in a display case at All Saints Church in Hagersville.  I was going to be different. Using my imagination and the basics of the pattern, I created larger disciples, making cone-shaped bodies, stuffed with quilt batting and secured with a circle of plastic canvas as the base. The characters easily stood upright. Each body has a costume and a hat. There is a plate and a goblet for each of the disciples and Jesus, as well as platters of bread and jugs of wine. I was particularly pleased with the goblets. To ensure that they would stand, I knitted silver yarn covers for caps from my insulin pen nibs! The jugs are stuffed with batting, secured in place with a circle of burgundy yarn to give the appearance of wine. Jesus and his disciples sit side-by-side along a table, made for the tableau by Frank Doyle, husband of Rev. Cheryl Barker, our rector.

While I was creating this montage, I took extra care to make sure that everything was child-proof. I joked that the children could toss the disciples from one to another without either the disciple or the children being injured! The day I told the story to the children, my great joy was in watching my godson, Luke Doyle, thoughtfully arrange the disciples around the table, making sure that each had a plate with bread on it and a chalice.

A few years later, I decided that I needed to create a nativity scene for the children to play with over the Christmas season. Mary, Joseph, and Jesus in the manger are supported by sheep, a donkey, and a camel, shepherds, and the Magi. My sister contributed a stable from an old crèche, to complete the montage. We left the crèche on a table at the back of the church, where the children could play with it. I told my great niece, Anna, the Christmas story using that set—again a time of great joy.

There have been many other examples where a few simple crafting skills will create lasting and joyful memories for children and adults alike. Egg cozies for chocolate Easter eggs, little Christmas stockings with a candy cane inside, or a lace angel — mementos for children or table favours for seasonal seniors’ dinners —it just needs your imagination and willing hands to bring a smile to someone’s face.